I’m working on a english discussion question and need an explanation to help me understand better. 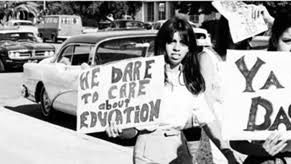 Your first post is due by Thursday and you need to join the group more than once as this is a discussion. Please respond to at least two of your classmates and also respond questions addressed to you; review the rubric to gain maximum points for this assignment.

I need you to respond to two discussions.

1- In the preface, Carlos Munoz Jr. expresses his realization that in fighting for the Chicano movement, other injustices were overlooked. Specifically gender inequality as well as homophobia was carried over into the movement and not addressed. Women are marginalized in the patriarchal model seen in both American and Mexican cultures. Homophobia was the cultural norm at the time. Initially the main three groups were people of Mexican, Puerto Rican, and Cuban descent so the focus was on these cultures which have distinct differences from each other. With globalization, there are 17 distinct groups due to displacement of people in many other countries in the Americas due to political, social, and economic upheaval.

I think these groups were overlooked because it was the first movement of it’s kind for Chicanos. This is what kept the focus more narrowly on education for Latino/a. According to the author, it appears that to him it didn’t even occur to them at the time to think about injustice against women. As he explained it a male centered culture was the norm in both cultures. Even though he recognized the strengths of Maria Baeza, she knew there was a better chance of success for the Chicano movement with male leadership. She sacrificed her ambitions for the movement. To address all of the different kinds of injustice would have been too big of a job. If as a group they are just enough like the culture they are going against, it would be easier to accept the change.

Place this order or similar order and get an amazing discount. USE Discount code “GET20” for 20% discount

Refer to Exercise 13.30. The f ZAP
Scroll to top
error: Content is protected !!